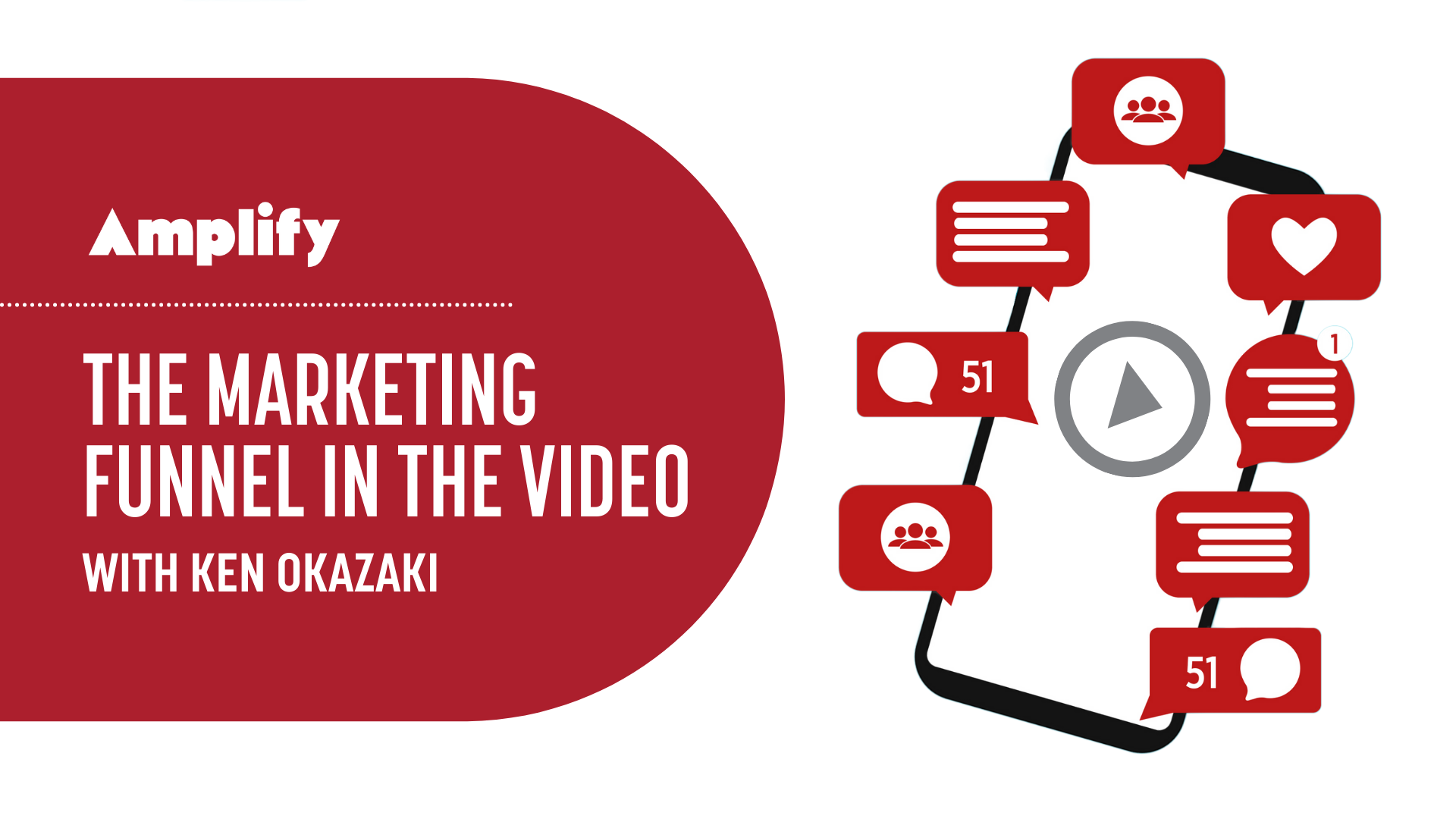 The Marketing Funnel In The Video

You’ve probably heard of the marketing funnel. But have you heard of the video funnel? In Part Three of our conversation with Ken Okazaki, host Elin Barton and Ken talk about making videos that get people from passively watching to actively engaging with you.

You talk a lot about making money with video marketing and about putting the funnel in the video. Can you just briefly explain what this is and why it’s important?

I realized that if I were to create a way that people could just format their videos in such a way that the funnel is inside the video, instead of having to build the funnel first and put videos in, then I might actually get people to actually do this.

Shoot videos on your phone. Learn how to write the titles that get people to stop scrolling, so that you can get your video started and hook them in in the 0.5 seconds you have, and then three seconds is the second decision making point. Introduce yourself. Lead their anticipation. Deliver dopamine to the bloodstream. Altruistically ask for micro-improvement.

And then move on to something called the missing link. How can you offer the missing link that the viewer never knew they always needed, that is priceless to them in the moment and free for you to give?

Then we shift down to the next stage which is the smooth segue. How can we get people from passively watching to actively engaging on social media with you? And then we pivot to the selling point.

And this all works on social media, without any external platforms. And it’s for people who don’t love the tech, but they do want to get started with video, and they do want to make money for their business.

I want to ask you about making videos that move people from that passive viewer to doing something active.

If you get 100 views and get 50 people, 50% of your audience to engage with you, then I would put that as a gold standard metric. And that’s what I shoot for. And every time I’ve hit that in the past, whether it was myself or my clients, I followed a simple pattern. All right? So you’re gonna want to write this down.

Number one: ask altruistically. You’re not asking them to help you get more likes or asking them to do something for themselves or even for you. What you’re asking them to do is to do it for a higher purpose. Of course, this has to map to what you shared that’s really impactful and powerful.

And if you did a good job earlier, and injected dopamine into the bloodstream, this altruistic ask is going to leverage the amount of chemicals that is currently running through their brain that makes them more impressionable in the moment. We’re going to leverage that. And then one up it with altruism, instead of everybody saying, “Me, me, me,” these days, right? It’s not even about you. It’s not about them. It’s about a higher purpose. And if you pull that off properly, you’ll get tons of people engaging.

Now, here is the second thing you want to do to get a high level of engagement is—I mentioned earlier about the missing link, right? “If you would like a free tutorial, that’s going to show you how to shoot video with your phone, and in less than 10 minutes, get that title on top, get the captions burned in and uploaded to your favorite social media platform in three minutes—free tutorial. If you want that, just type ‘Yes’ down below.” I guarantee you, because I’ve run this ad many times, I’m going to get a very high level of engagement.

The idea here is the “Aha!” moment has to create a gap between what they know is possible—I explained to them all the information and why it’s important. And then I created a gap between, “What if you could do this on your phone in three minutes or less?” Now they’re just like, “Oh, here’s what’s possible and here is what’s achievable now, if I have this missing link.” The missing link is what’s gonna get people there. It’s not the lead magnet. It’s way more engineered than that.