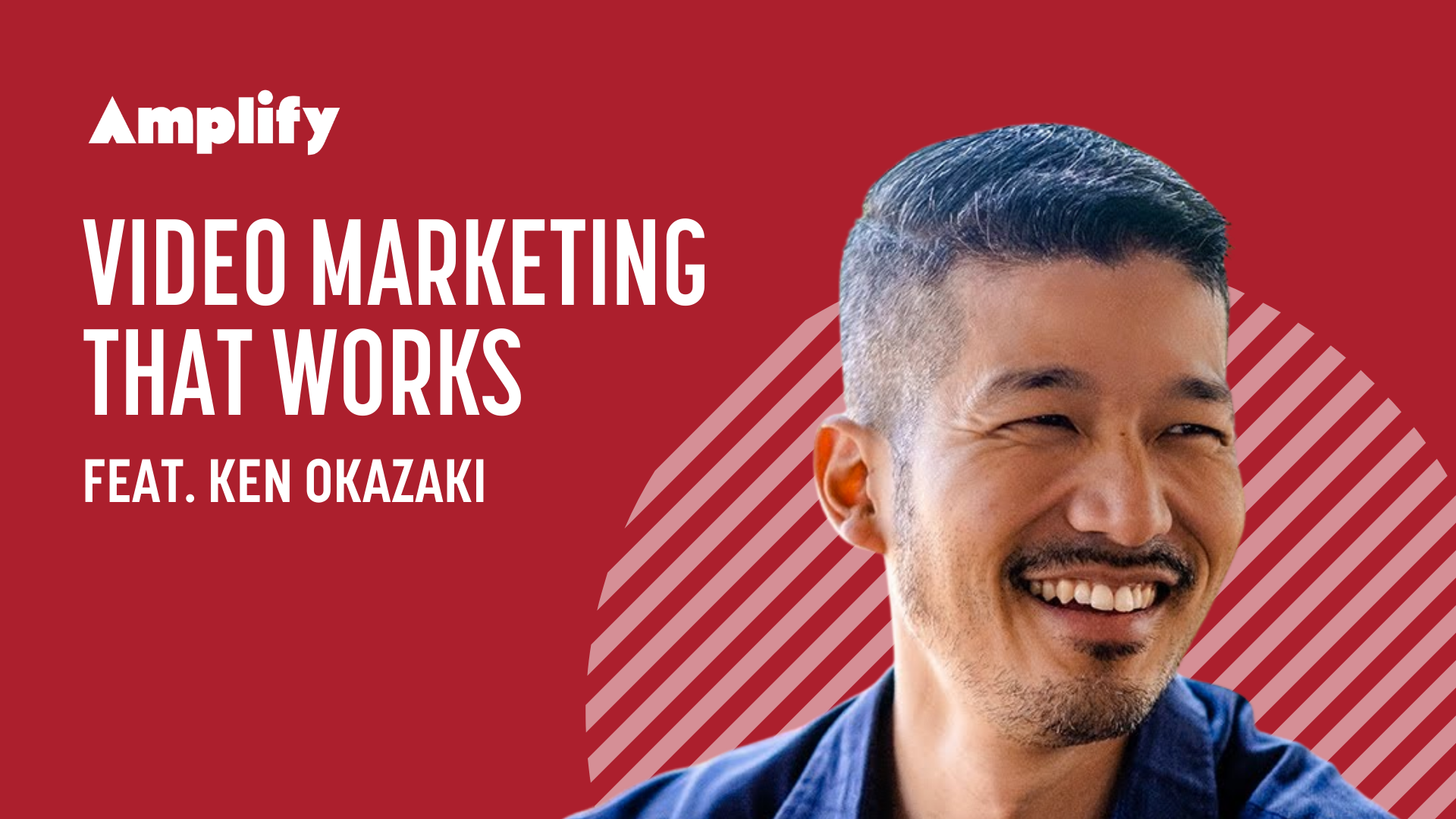 Many people know they need video marketing but frequently don’t know where to start. They’re asking questions like “What platform should I be on?! How long should my video be?!”

In this episode of Amplify, host Elin Barton chats with Ken Okazaki about these important questions and how to get started.

At what length do people actually get excited about something and then stick around to the end?

Hi, everybody. Welcome to this episode of Amplify. I’m Elin Barton with White Knight Productions. And today, I’m talking with Ken Okazaki. He is a video marketing expert coming to us all the way from Tokyo, Japan. Very excited to have you talking with us today, Ken.

Hey, thanks, Elin. Thanks for having me on the show.

So, my first questions are about all the different video platforms out there. People know they need video marketing. They frequently don’t know where to start. And it can be overwhelming. So when somebody is getting started, would you say it’s important for them to focus on one platform? Or what advice do you typically give people?

You got to figure out which platform your audience is on. And you don’t have to kill everything else. But if it’s distracting you, you absolutely must figure it out, nail it, figure out what is going to make your content look native on there, what is gonna be the gathering point for your community. And then once you have mastered that one platform, then expand. And that’s the order you got to do. So the answer is gonna be different for everybody. It’s not “Where do you want to be?” It’s “Where is your audience? Where are your paying clients hanging out? Or your potential paying clients?”

Would you be able to give a recommendation for the ideal length a video should be on the different channels? What do you find resonates with people? We hear all these stories about people not having a long attention span.

Absolutely! Thank you so much for asking that. It’s a question that has probably 100 correct answers, so I’m just gonna give my version of this. CNBC—they did a study. I don’t know why they spend their money on this, but it was interesting. They figured out that 69% of people, when they’re using their phones, they’re sitting on the toilet, like sitting, right? And I thought “Well, that’s really interesting. If 69% of people”—and this is specifically Facebook, by the way—”while they’re on Facebook, they’re in the toilet, then I should do some market research.”

I grabbed my phone, went to the nearest bathroom, pants around my ankles, phone in hand, and started scrolling through Facebook. This is how I do marketing research, really get into the mind of my audience. It’s important. If 69% of my audience is doing exactly that, let’s figure this out.

I started scrolling. I saw a video. And it looked interesting, but it had no headline. I had no idea who this guy was; I kept scrolling. And I realized “Hey, this is something important going on here.” If I need to get people to watch my video, I first got to get them stop scrolling. If they don’t know who I am yet, if I’m trying to reach a new audience, I need a great headline to get them to stop scrolling. So that’s number one, right? And I’m getting to number three, which is going to answer your question directly.

Number two. Another video came on. And it looked interesting, and this girl was talking about an environmental issue. But the speakers started blaring. I’m in a public restroom. There’s someone on my right side, someone on my left, potentially, and I quickly skipped off of it. And there were no captions, so even if I muted it, I wouldn’t have been able to continue consuming it. So the second thing I learned is, if you don’t put in the captions to your videos, you’re losing—and here’s a number directly from Facebook: 85% of your audience is watching videos without audio. So you’re going to lose 85% of audience right there.

Now, here’s the third one, to answer your question directly. I came across a video; I loved it. It was an educator talking about the different modes of learning. And I started watching about three minutes of it. And then my eyes dropped down to the play bar, and I saw there’s 42 minutes left. I’m like “I don’t have 42 minutes to sit here. Everybody’s gonna wonder where I am,” right? So what did I do? I went and put it in “Saved for Later,” you know that magic folder that everybody does to suppress their guilt about not watching the thing that they know they should probably watch. The thing about that is, I’m going to guess that you and most of my audience don’t even know where that folder is, much less ever go back and watch all the videos in the “Saved for Later.” That is a black hole and you never want to get put in the “Saved for Later” folder; avoid it at all costs. And that’s been my motto.

So I started experimenting, at what length do people actually get excited about something and then stick around to the end? And we’ve done over 4,800 videos in the last couple years. And the magic number is somewhere between two and five minutes. Simple, right? And here’s what’s really important about the two to five minutes is that this is not just guessing. We’ve done tons of market research. We’ve done eye tracking, and eye tracking supports everything that I’ve just told you. The first thing people look at when they’re scrolling is the headline—0.7 seconds, right? Second thing people look at is your face, hopefully trying to listen to what you’re saying. If there’s no sound, they’re going to look for captions. If there’s no captions, they will hover for about one second while they’re deciding what to do. And then, here’s the last place they look before they make that final decision—the play bar. Their eyes go straight to the play bar. They see “How much time do I have?” And that’s the decision maker on if they’re going to continue watching your video.

So this is really, really, specifically important on Facebook and on LinkedIn. And I can’t give you the whole two-hour dissertation on every platform. But I think this is going to cover a large part of our audience. And I think that information, if you just grab that one thing, is going to transform your game as far as getting more people to stop and watch your videos, provided you’ve got something important and interesting to share.